Helping Otto (and I) Out 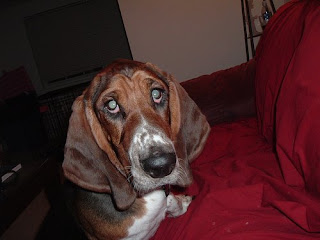 Hey, all. Those of you on Friendfeed have likely heard that while I was away interviewing at NC State, my Otto my basset hound was boarding at the animal hospital, and somehow his mild entropion (a turning in of the eyelids) got severe practically overnight. I just picked him up from the vet, and his eyes are ulcerated. They've scheduled the surgery for tomorrow which was, to say the least, horrifying and unexpected. Someone on FF (Kaia?) suggested CareCredit, which offers financing for medical type stuff, including vets - and happily, they have offered me a small credit line to use on the Ottopuss. Unhappily, it is nowhere near $1500. (Which is less than I thought the surgery for both his poor eyes would be, but is still beyond me by quite a bit).

So another bunch of awesome friendfeeders mentioned I could use tipjar or Paypal from the blog and let the beneficence of the webworld get showered on Otto's snooter. Thanks to Bobbi, there is now a PayPal button on the top left of this blog for the Save The Otto's Eyeballs Fund, for those of you who have a few extra pennies and were wondering where you should toss them.

I feel utterly ridiculous posting this on my librarian blog, but for those of you with pets - or those of you with children who remember how you felt about your pets before the kids came along - he is my sole companion. I lurv him more than anyone except my mom. If you understand and have some spare change, I'll beg on Otto's behalf. See the pic? how can I resist that face?

JMS had a great idea (because I felt like such a skeez asking for help) - whatever is donated to help out the Otto, I will donate an equal amount to the ASPCA (or we can take a vote for charities of choice for animals) once I make that moola back. So you're not just helping Otto, you're helping all of our furry pals. Dear JMS: you are an excellent idea-haver. And I love all of my friends for not thinking I'm ridiculous for getting teary over my pup.

Bobbi Newman said…
My pets are my babies! I totally understand! I'm so glad you got it to work. Hugs for you and Otto
5:11 PM

Anonymous said…
You're so welcome! I hope that dear sweet dog is better soon. And I just consider it as a way to "pay it forward". An opportunity to help out someone I respect as a professional and a person who happens to love her dog as much as I love mine. Weep away!
5:20 PM

Anonymous said…
Good for you for putting your pride aside for your dear friend (I know how hard that can be -- I'd probably rather walk over hot coals than ask for help). Adam and I love Bassets and I recently found out that my favorite Basset (there's even a picture of him in my book) passed away. I wish I could have done something to help him, but I'm very glad we can do a little something for Otto. What a face!

warmaiden said…
I cannot believe how you guys have come through for me - thank you so much. Just knowing that you all have such big hearts and were willing to help helped me fall asleep last night - with otto all curled up on me.

@Meredith - I'm so sorry to hear about your basset buddy passing! If you need bassetude in your life, Otto can lend it *grin* Again, thanks to all. I am about to post about how lovely my people are :)
9:08 AM

Brandi Tuttle said…
i'd love to bask in the otto love! hugs and pennies to you both!
9:19 AM

Allison said…
Aw, poor Otto moose. That face reminds me of when he was just a wee pup. I am sending a bit of money to your PayPal, from me and my favorite golden retriever Mikey. Please give Otto hugs and kisses.
9:38 AM

Popular posts from this blog

August 19, 2008
We all know how important first impressions are, right? It's sort of like how Anne McCaffrey's dragons "impress" on new dragonriders-to-be. (Yes, I'm feeling nostalgic with a new herd of freshmen on campus.) First impressions are essential, particularly when you're talking about freshmen, wet behind the ears, completely disoriented and overwhelmed by being at a state school for their first college experience, and stressed out by trying to find their classrooms and last-minute add/drops on their schedule. I usually don't think of them this way, because I'm not a fundraiser or in the alumni office, but the University at large should also think about the fact that these are the kids we hope will call this university 'home' even after they leave. (That could be my small liberal arts college experience shining through, though.) If nothing else, due to UTC's abysmal retention rates, you'd think the entire university would be bending over bac
Read more

July 30, 2010
Innovative Interfaces (known in LibraryLand as III) and SkyRiver are suing OCLC under anti-trust laws. You can read the full complaint here , and I recommend you do so. It's not an awfully long read, but it certainly is enlightening. K.G. Schneider addressed it so well, you should read her blog post about the situation, which gets right to the heart of what makes this complaint stink. At the risk of being a Ranty McRantypants, I would like to note that if you read the suit, III & SkyRiver are complaining that OCLC's innovation hurts them. Which is fascinating, since librarians have been *begging* III and other traditional ILS vendors to innovate - and making recommendations on how they could do so to fit our changing workflows and services - for decades. Now that they've found themselves behind the curve they want free access to what librarians & OCLC have built over decades. Full disclosure: if you've read my blog, you know that my library's a developm
Read more

May 19, 2008
My first participation in a meme! In librarianchat via the LSW wiki, a few folks decided that, in the interests of helping new graduates (and to amuse ourselves), we'd dust off some old cover letters and post them, with advice. The wonderful Rikhei (who shares my last name, even, and thus is doubly cool) started the meme here . I decided to post the cover letter that got me my current, most-excellent job. At 3 pages, I realize that this cover letter is far longer than what is usually prescribed. I received cover letter advice from one Professor Lisa O'Connor that recommended the strategy of bullet-pointing each requirement from the job ad and addressing it directly, so that's exactly what I did. I got over seven interviews for academic reference/instruction positions, and more than one offer, so while this length likely isn't the norm, it worked for me. Cover Letter I am interested in the position of Reference and Instruction Librarian at the University of Awesomen
Read more